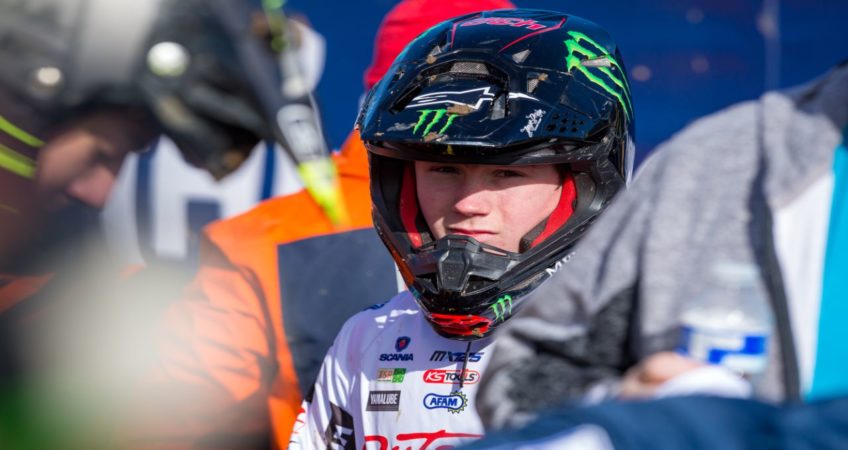 Posted by mxnieuws In Geen categorie 0 comment
Ivano van Erp of the MJC Yamaha team had an educational weekend at the first game of the EMX125 Championship in the British Matterley Basin.

Ivano managed to qualify for the main program in his first EMX125 race, but suffered some setbacks in the motos, which prevented him from scoring.

Heavy rainfall and strong gusts of wind caused the Saturday program to be shortened considerably, so there was only a time training. It went well with Ivano and he managed to qualify for the match with a fourteenth time.

Before the start of the first moto it started to rain again. When the starting gate folded down he did not get away well and had to come forward from the rear. In the hustle and bustle of the first round, a problem with his glasses arose and he had to enter the pits to put on another one. In good spirits he continued on his way but the muddy track was very treacherous and Ivano crashed a number of times, eventually finishing twenty-ninth.

The second moto was held on Sunday morning and this time the weather was much better with the sun. He now got off to a much better start and was able to start the race in seventeenth position. Unfortunately, he suffered a setback in the first round because he came into contact with another driver in the heat of the battle and fell. He had to advance from 37th place. Ivano did not give up and fought many beautiful fights during the game to be flagged as the 25th.

Ivano learned a lot this weekend and his speed was good to finish higher in the coming games. In two weeks Ivano will ride his next race, this is the first race of the French Championship 125cc in Castelnau de Levis.